Sage Bionetworks works on research communities and develops and applies open practices to data-driven research for the advancement of human health. If one reviews machine learningan application of AI that provides systems the ability to automatically learn and improve from experience without being explicitly programmed. Machine learning focuses on the devel... model development, traditionally, data ends up on an individual’s computer. But secondary and tertiary data are redistributed without consent, which could be dangerous. Such issues could be mitigated by “Model to Data” which has a private network of containers with limited exploratory capabilities. Code goes where the data is, and containers can be maintained over time for data analysis.

The Model to Data (M2D) stewardship is a burden: it must act as a mediator, evaluate data fitness for public use, organize and format the data, retain control, assess models, subsidize cloud use, and enable reuse and openness. It is not a silver bullet but a way to make data available for research with novel scale and authorized access. One example is thousands of mammograms that Sage had under contract. If you can’t beat the floor, you shouldn’t collect data using AI.

Governance on M2D stewardship requires expertise in data curation, modeling, platform technology and ethics. One major consideration is incentive and recognition. Since M2D is not free but federated, Sage advocates for a network of container sites funded by HHS. As a fundamentally secure model that allows benchmark, sending Models to the Data would generate innovation for the research community. 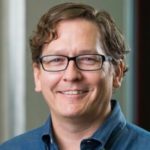 John Wilbanks is the Chief Commons Officer at Sage Bionetworks. Previously, Wilbanks worked as a legislative aide to Congressman Fortney “Pete” Stark, served as the first assistant director at Harvard’s Berkman Center for Internet & Society, founded and led to acquisition the bioinformatics company Incellico, Inc., and was executive director of the Science Commons project at Creative Commons. In February 2013, in response to a We the People petition spearheaded by Wilbanks and signed by 65,000 people, the U.S. government announced a plan to open up taxpayer-funded research data and make it available for free. Wilbanks holds a B.A. in philosophy from Tulane University and also studied modern letters at the Sorbonne.